I managed to slip over on 6-November-2015 and fracture the femoral head of my right hip. This blog is just to keep friends and relatives up-to-date with my recovery. It also will show where the NHS is good and where there is opportunity to improve. If you click the images tab (above) there are a few images of the break before and after the repair.
Update 10-June-2016 - sadly the femoral head has avascular necrosis and a total hip replacement will be carried out on 15-June-2016
I am home in Stoke Bruerne

Not quite such a good night but still much better than any whilst I was in hospital. Too much wine with Rob and Helen and Mother Nature knocking on the door a couple of times during the night! 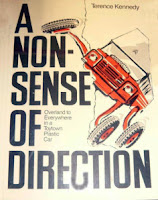 Whilst I was with my friends Rob and Helen yesterday my friend Steve called me on FaceTime (an iPhone application) - it was so good to see him, his wife Edite and daughter Jolanta but what really floored me was to see Terance and Elise Kennedy.  Terence wrote a book (A Nonsense of Direction - Overland to Everywhere in a Toytown Plastic car) about their adventures in a 2CV Méhari driving in all sorts of places around the world - I haven't seen Terence and Elise for such a long time and what a treat it was to make contact again - I now have their contact details so I shall be in touch. I have a copy of Terence's book which I treasure.

I last had contact with Terence and Elise when they were living in what Terence called a 'Dorpie' (Africaans for a small town but I think it has more of a connotation than that!) called Rustenberg just outside Johannesburg.

A quiet day followed by a most entertaining evening with Lynda and Sam in the Spice of Bruerne and then to bed quite exhausted.  My stamina is not what it was!
Posted by Leo No2 at 06:18

And the chosen one was:

This is a list of things I think I need/want help with. I will update it as things happen.
• Nothing at present